This Saturday Devonna from LotroStylist and myself were invited to be the judges at the Fashion contest in Crickhollow, organised by the Second Breakfast kinship at the theatre stage of their kinship house. Devonna and I had to create a new character on the server to be able to attend. Being that this was a fashion contest, and since we both had an official position at the event, we decided that we should be dressed appropriately. Now it’s really strange to dress up as a fresh level 6, without access to wardrobe or any of the cosmetics that we have on our home servers. Still we managed to find proper attire in Michel Delving, as the outfitter there sells the Fancy Robe that I was able to afford with the few silvers I received in the starter instance. Devonna and I found we had matching cloaks as well in our inventory, and we chose our own accessories from a selection of beginner’s quest rewards. Daisygold, the host, was kind enough to send us a few dyes for the finishing touch.

We had a great time at the show and it was very hard to judge the different outfits that were showcased in the various categories. Some were really cute but not so creative or original, others were very creative but perhaps lacked coherence or mismatched a certain detail. But there were some that were both creative and well balanced. Based on those criteria we chose our winners even though sometimes it was a really tough call. It was definitely an inspiration to see all the effort that the players had put into their creations and based on that they were all winners to me. I think in the end every participant got at least a firecracker or a pie!

I highly recommend you see the slideshow of the Fashion contest: here.

Thank you Crickhollow and Second Breakfast for your hospitality and a very enjoyable afternoon/evening! 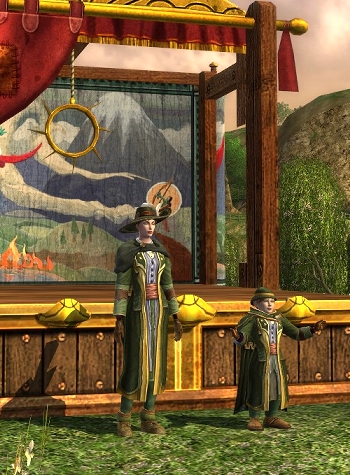 What Hymne and Devonna are wearing: