Where can I find cosmetics?

Outfitters
There are Outfitters in Bree, Thorin’s Hall, Michel Delving, Celondim, Trestlebridge, Othrikar, Stock and Rivendell. Check them all. Items purchased from the outfitter do not bind to character.

Armour Smiths
There are Heavy, Medium and Light Armour Smiths in many towns and regions in Middle Earth. All selling different levels and types of armour for just a few silvers. Go there and try it on with ctrl+left mouseclick! It really looks different on your own character and with another dye colour applied to it. Armour purchased from armour smiths does not bind to character.

Festivals
Every festival usually offers several cosmetic items to barter for. These items do not bind to character. The Yule Festival in winter has a questline with specific cosmetic rewards. During the Anniversary festival in April you can find them in boxes that you barter for tokens. These boxes can contain some very unique cosmetics such as Elven Circlet or Short Elven Robe, or sleeveless/short-sleeved versions of more common cosmetics.

Skirmish Camp
You can barter for regular cosmetics and for special “ceremonial” versions of raid armour at the Cosmetics vendor at the skirmish camp. You can also buy all types of older raid armour at the Skirmish Classic vendor. Check out the Cross Class Bartering guide on where to buy armour that is not for your class, but very useful as a cosmetic. Skirmish cosmetics bind to character if you drag them directly into an Outfit slot, however if you copy the item to your Wardrobe, you can store the original on an alt (or sell it on the auction house). Ceremonial Cosmetics are bound to account.

Quest rewards
Some quest rewards have unique cosmetic properties with a special design that is not otherwise or commonly available. Use the ctrl+left mouseclick option before choosing your quest reward. Stats can be compensated for, but quest rewards are only offered once. Quest rewards are of course already bound to character, so you will have to store them on the character that obtained it. Volume III, Book 4 & 5 (Isengard) and Book 10 (Wildermore) from the Epic questline have exclusive cosmetic rewards.

Token rewards
You can barter for token armour in Moria and Lothlorien. Some items that you wouldn’t use for the stats are still valuable as cosmetics. If you have some excess Moria or Lothlórien tokens, use them for cosmetics! Check out the Cross Class Bartering guide to buy armour that is not actually for your class, but still useful as a cosmetic. Raid and Instance Tokens are obtained by running the dungeons of that particular area and are bound to account (or shared wallet), so can be passed to an alt if needed.

Loot
There is always the odd chance that you loot something cosmetically valuable, even a grey item like Elven Leather Boots or a Plumed Hat. Burglars have a chance at obtaining “grey” loot by using the burgling skill, which can have a unique cosmetic appearance. Check all armour with ctrl+left mouseclick before selling it.

Auction house
Spend time on the Auction House. Check all armour for appearances, all cloaks and all outfits. Check items with a strange or uncommon name. Check all non-crafted yellow and purple items. Ctrl+left mouseclick is your friend.
Especially uncommon yellow items (helmets, shoulders, cloaks) between level 45 and 75 with the name “of Vigour” or “of Fate” sometimes show up with a unique appearance.
While you’re there, check for cheap dyes!

Hobbit presents
The Hobbit boxes that can be opened daily have a chance of dropping three different armour sets: light, medium or heavy armour. These sets are bound to account. The default armour proficiency of the character that you are logged in with when opening the present, determines whether you will receive a light, medium or heavy version. So if you aim for the light version of the shoulders, make sure you are logged in with a lore-master, rune-keeper or minstrel when opening the box. The appearance of these armour sets is currently unique in the game. They used to be PvMP sets, but where removed from the game in 2012. The Hobbit boxes are currently the only way to acquire these appearances.
In addition, Hobbit presents can drop Mithril Coins that can be used to purchase cosmetics at Lalia’s Market.

Lalia’s Market in Bree
In 2013 Turbine added a wonderful new place to the Lotro World where you can buy all kinds of armour pieces as cosmetics. All items are bound to account so you can move them around between your characters. The pieces are on display and when you click on a piece it shows you a preview of your character wearing the piece in the dressing room. You pay for these pieces with Mithril Coins, a currency that you can purchase with Turbine Points, or occasionally find in Hobbit Gift Boxes.

Mannequins
In several locations around Middle-earth you will find four mannequins displaying a full outfit set. Many of these sets have been assembled by the author of this blog, but other blogs and cosmetic designers have also contributed to these displays. The mannequin outfits are changed with every update and never repeat, making them unique sets.
The sets can be purchased with Mithril Coins. The mannequins are now an integral part of Lalia’s Market as well.

Store
Last but not least, there is the Lotro Store. The store has several unique items that you cannot obtain in game, but it also offers some items that are actually quite easy to acquire, so be careful before you decide to make a purchase! Cosmetic store items are bound to account, so you can store all these items on an alt, however to transfer them to an alt you have to make use of regular Shared Storage, as these items cannot be mailed.
There is a “try it on” button in the Lotro store that will allow you to preview the item in the dressing room. 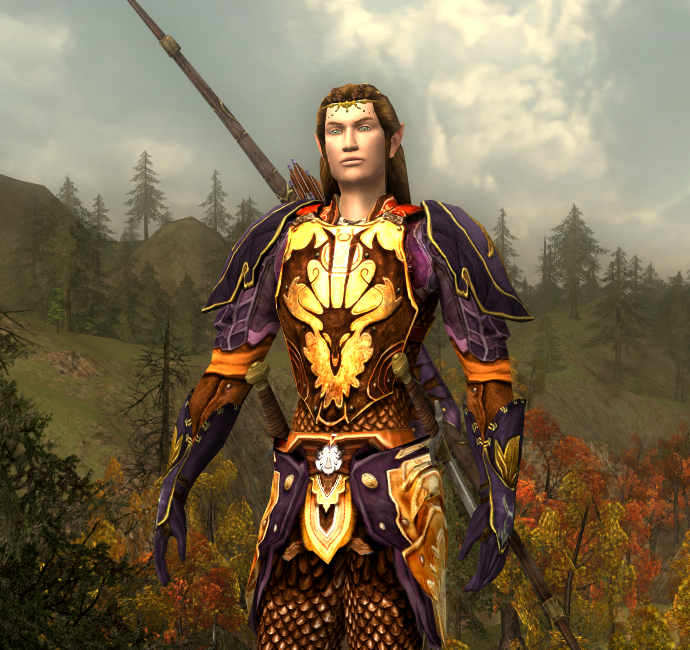