The idea and fun of outfitting is to create a look that is, at least to a certain extent, unique. The fun is to avoid generic looks and entire ready made sets, but instead combine pieces in such a way that you create a completely new ensemble. Ever since the release of the Isengard pre-order cosmetics, everybody seems to be wearing the same outfit in either white, red or green. Of course the sets look really good and the individual pieces were designed to be combined as a set, but to look exactly like the other half of the Middle Earth population is no my idea of “looking good”. Now to have those pieces collecting dust in my vault is also a shame, so today I decided to take one of those very lovely hauberks and create a personalized minstrel outfit with it. Unfortunately all the Isengard pieces suffer from bad “clipping” (which means you see parts of the armour cut through a top layer). On some races it is worse than on others, and some pieces clip worse than others, but basically all the Isengard pieces are affected in some way. This is a real shame because it makes outfitting with these pieces really hard. For example the hauberks clip through regular boots. It is not so bad on female elves, but still visible on the inside of the legs. I decided to accept it for this outfit, but you should be aware that it happens.

On another note, these screenshots were taken while I was standing outside the Prancing Pony playing my harp. Barliman Butterbur had asked me to play an inviting tune as business had been a bit slow lately. While playing softly I listened to the people passing by, trying to figure out why customers would suddenly avoid the Prancing Pony. People were gossiping about how a particular minstrel had been playing at the Pony a couple of nights, and how he was all full of himself while in reality he was barely a beginner on the Theorbo. They also mentioned the Pony suddenly being filled with yelling and fainting young girls, and how the customer base really had gone downhill lately. I heard the name “Aegthil” mentioned a couple of times. I communicated what I had heard to Butterbur, who nodded with a grim frown and looked like he was about to detonate. 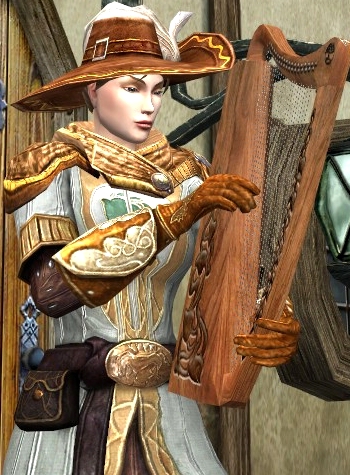