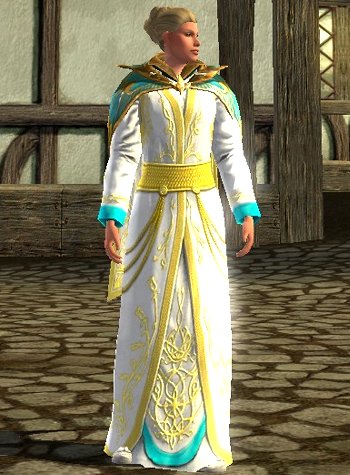 The 4th Anniversary celebration of Lotro is not as successful as previous anniversaries have been. There are lots of nice cosmetics, very special maps, and a unique anniversary horse available, but all these items require a lot of anniversary tokens to buy and there are really very limited ways to obtain those tokens. This puts most of those items out of reach of the casual players. In terms of my own situation, being a casual and non-pvp oriented player I have avoided the bar fight, but this implies that I am only able to obtain tokens from the horse races. On top of that I play on the European Codemasters servers and unfortunately the EU is excluded from the lotteries that enable US players to acquire some extra tokens. I am still hoping I will be able to collect enough tokens to get the horse somehow.
I had already resigned to never being able to obtain the robes and cloak, until a very generous player on my server offered to “loan” them to me. In fact, he extends this offer to the entire server and even announces it on the forum and in /globallff for anyone who would otherwise miss out.
Thank you Torii from the Snowbourn EU server! Thanks to you I am now able to wear these robes without ever having lifted a beer mug! You truly set an example for our community.

I left the robe in its default state as dyeing doesn’t improve it at all. The only thing I added are some Mirkwood minstrel shoulders as a finishing touch. I have my woman loremaster modeling the robe as I think it best suits a woman and looks rather plump on an elf. When the cloak is used on a hobbit it has the regular long cloak length, on man and elf it is shorter. 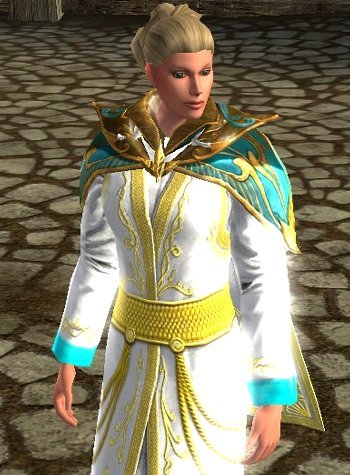 Back: Cloak of the Shining Star,  white dye