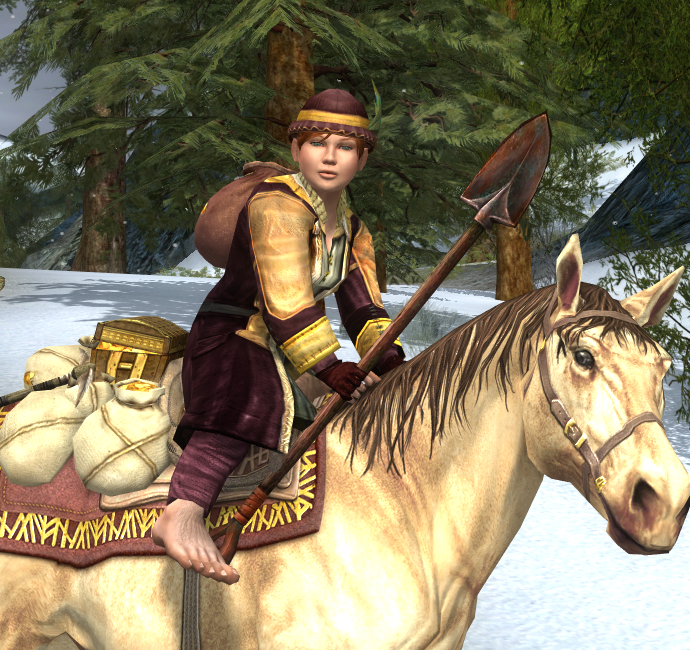 The Treasure Hunt will be on this week! I was so excited to see the Lotro Calendar updated with several fun events for this month and the next! As the Riders of Rohan expansion has been delayed until October 15th, I guess the community team decided to move the Event schedule around a bit and keep us very very busy collecting all kinds of treasures this month. The Treasure Hunt was launched early this year for the first time and we haven’t seen it return until now. It is an incredibly entertaining and very addictive event that gives some fine cosmetic rewards, some of the most awesome emotes in the game, delightful housing items and a few beautiful unique mounts with high morale and speed. I know that when the event ran last time, I have been digging and digging until my hands bled! If you want to find out what exactly is up for grabs, check out Ketani’s Treasure Hunt guide. Today’s patch notes mentioned some new rewards for the event, so there will be even more goodies to dig up!
Just one warning though: the event is indeed very addictive. The quest cycle which gives you the Treasure Hunt Picks has a rather long cooldown that keeps you waiting impatiently, which can make it very tempting to buy the rather expensive picks in the Lotro store. I would advise against that, but in stead switch to one or two different alts to do the same cycle while you wait for the cooldown on your main to finish. Most rewards are bound to account and can be traded, except for the mounts and some of the major emotes. There is a barter that sells cosmetics and a selection of emotes, and this year a special mount has been added: the Harvest-brew Goat!
All cosmetics are bound to account and can be bought from the barter, except for the Treasure Hunter’s Rucksack, which only drops from digsites.

The Tale of the Shipwrecked Mariner event will run alongside the Treasure Hunt and is already live now. I think these two events are a perfect combination, as the pirate event in itself is a bit small and rather insignificant in terms of rewards. If you still need a pirate hat of sorts, head over to the Brandywine Bridge where you will find the beginning of the questline. If you’re looking for the perfect pirate cloak, check out the Classic barter at the skirmish camp. He sells three cloaks in the Forsaken Inn section. They’re awesome in combination with an eye patch!