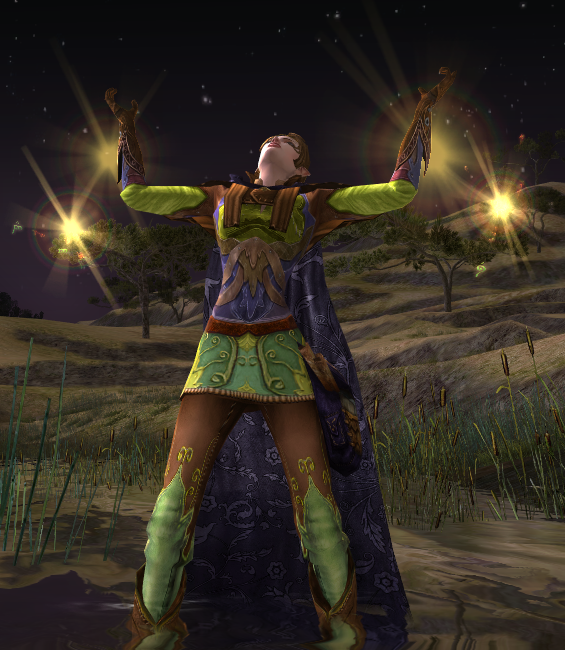 The Elves first awoke under the stars (the Sun and Moon did not exist), and the stars were the first thing they saw. The earliest words spoken by the Elves are associated with the stars. According to Elvish legend, ele was a primitive exclamation ‘behold!’ made by the Elves when they first saw the stars. From this origin derived the ancient words el and elen, meaning ‘star’.” Moreover, when Oromë first met the Elves, he too associated them with the stars and named them the Eldar, the People of the Stars.

One of the nice surprises among the quest rewards in Thinglad, The Great River, is the Cloak of the Rescuer. This cloak shares its pattern design with the Harbringer’s Cloak, a pre-order gift from the Mirkwood Expansion. Because I never pre-ordered Mirkwood there was no way I could ever get this cloak, so I was very pleased to find the same pattern  on this cloak, with the difference that this is an unhooded version, while the Harbringer’s Cloak is hooded.

The ceremonial version of the Leggings of the Seven Stars has been available at the Skirmish camps for quite a while in game, but has now moved from the Classics vendor to the Cosmetics vendor. The ceremonial version is cheaper than the original version, which remains available at the Classics vendor. The Fine Elven Circlet is a rare cosmetic item that drops (or at least used to drop) from Anniversary boxes. These days it also drops from the infamous Steel Bound Loot Boxes. These Loot Boxes do have some uncommon cosmetic items in their loot table, such as the circlets and short sleeved dresses.