Though the soldiers of Stangard are strong and fiercely loyal to their king, the village has fallen on hard times and hope is in short supply.
Established on the highest rise in the rolling plains of Eorlsmead, the Rohirrim village of Stangard keeps its watch over the region. 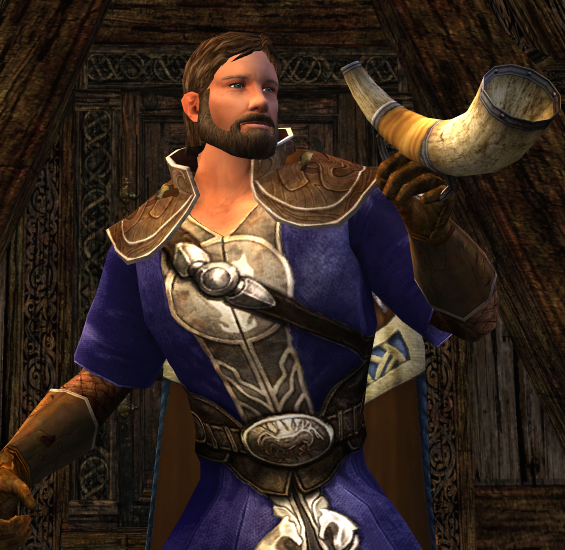 What I thought was going to be a grind turned out to be a delightful adventure. Reaching kindred status with the Riders of Stangard is not hard at all if you follow all the questlines till the end and turn in some task items every day. In fact I reached kindred status when I had not even reached the Brownlands yet. Kindred status rewards you with the option to buy all kinds of goodies at the reputation vendor, one of which is a cosmetic item: the Rohirrim Tunic and Pants.
The classic Tunic and Pants type of cosmetics are a one-size-fits all solution that fills your chest, legs, feet and hands slots all in one go. This is not very nice for players who like to customize their looks, as the only thing you can really add to them are shoulder guards.
These Rohirrim Tunic and Pants are the first of their kind to allow for boots and gloves. Unfortunately the pants that are part of this type of design are pretty wide, with the hem halfway the lower leg. Though I was looking forward to combining my boots with this cosmetic, I’ve come to realize that almost any and all boots are too high and make the pants clip through the boots. This means you have to either use shoes (which I dislike, as most of the time this looks incredibly silly) or find boots that don’t or hardly clip. I found two pairs of boots in my inventory that do well: the ones that you see in the pictures and also the medium leather boots from Moria that you obtain with barter tokens for either warden, hunter or burglar. The latter boots work well on female characters but not so well on males, that’s why I’ve used my Isengard boots here. These boots can be obtained as quest rewards in Dunland but also drop as a boe item in the Isengard instances.

So while I am a bit disappointed about the options for this cosmetic, there’s another Tunic and Pants available from the Limlight Gorge reputation vendor that is on my wish list. However the grind for the Limlight reputation is a bit harder as you have to do your daily quests in groups. Though there’s no lack of groups running that content at the moment, I think I will take the grind bit by bit. Reaching kindred status will not be nearly as fast as with the Riders of Stangard.