In the series of spring concerts, this lady has been seen around the streets of Bree, playing her harp and singing a capella. She uses bright coloured vestments to attract the attention of bystanders and collects any coin that she receives for her performances in her tiny coin purse.
The outfits in this concert series are all theatre costumes, and definitely not suitable to use when going into battle.

In this concert series I try to use cosmetics and items that are accessible by minstrels, and avoid using class exclusive items from other classes. The gown in this outfit is a cosmetic from the Anniversary Festival, that will hopefully be available again in April. Many players on the European servers missed out on these cosmetics, because they avoided the much disliked Bar Brawl quest, and had no access to lotteries last year for some extra tokens. I really hope that things will be different this year.
The ceremonial version of the circlet will also be offered in the Lotro store as of Update 6. 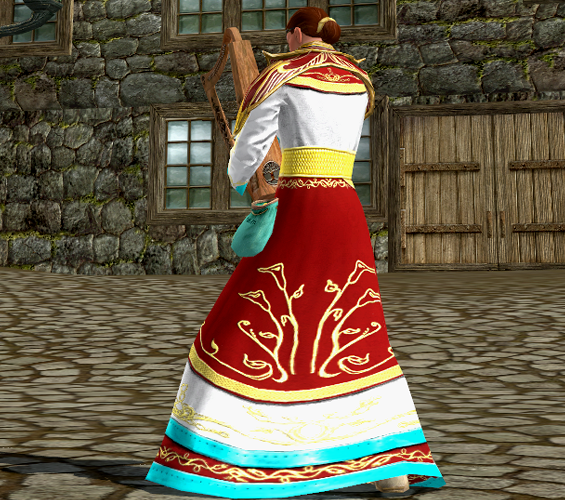 Leave a Reply to The Starry Mantle Cancel reply