I did something I never thought I was going to do: I started a dwarf character! Last week the character slots were on sale, so I took the opportunity to open up an extra slot and fill it with the only race and class that I have never played before: a dwarf guardian. After ten levels I must say that guardian is most definitely not my class, but I am not giving up yet! Even though he is still a low level guard, I had to give him an outfit that looked a little better than the boring medium leather stuff from the quest rewards. To my surprise I found that items that I usually discard from my inventory, actually suite a dwarf very well! One such item is the Hauberk of the Mithril Guard. This item appears in my inventory each time I create a new character, and I actually never used it on any of my other characters. However, I think it’s very appropriate for a dwarf! The hauberk has a dark blue-greenish shade as base colour so it only dyes well in darker colours and blues are best. The shoulders on the hauberk are coloured in a beautiful bright gold so it would be shame to cover them up with anything.

The Hauberk of the Mithril Guard was a 2008 give away item from mmorpg.com. However, you might still be able to grab a code for that hauberk if you follow the steps mentioned in this forumpost. Thank you Sandybux for the tip! 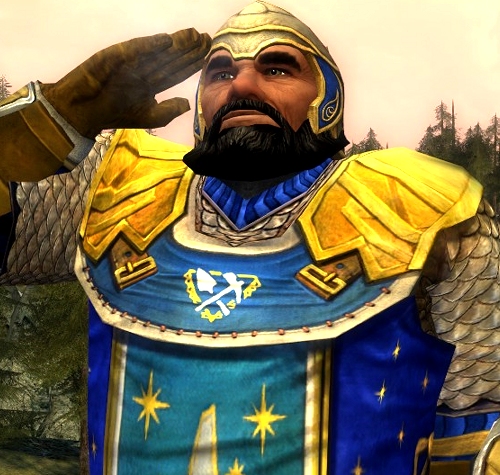