When the Epic Book 5 of Volume III: The Prince of Rohan was released I was thrilled. In the first chapter the rangers gave me all their old clothes! Suddenly the envy that I and many other cosmetic lovers had endured, seeing all those ranger NPC’s walking around in real casual ranger outfits, came to an end. We were finally able to dress like that ourselves! The rangers were even handing out two different sets, which was even more awesome! However, the excitement was short-lived. Soon Galtrev became infested with players in ranger outfits, suddenly everyone was a ranger and looked the same as everybody else. I felt discouraged, because as much as I liked these new cosmetics, I didn’t want to look like everyone else.
To my chagrin these cosmetics have been sitting in my vault collecting dust. With the exception of an occasional hood or some shoulders they have gone largely unused. Until now!
The Summer Festival provided us with a new funny hat. A hat that I’ve seen being used in many different outfits already, thus at risk of becoming another dust-collector in my vault as well. The hat has an undyeable green rim alongside the edge which is a perfect match to the Worn Ranger Tunic. Add to that a small green leaf brooch on the cloak and suddenly my Hobbit Ranger was born.

Last week a new type of Lottery has been added, rewarding all sorts of boxes. All characters from any level can participate in this lottery. The boxes have a chance to drop a cosmetic item, the same ones that drop from the Anniversary boxes. Some rare cosmetics can only be obtained from those boxes like the Short Elven Robe and the Short-sleeved Elven Tunic and Trousers. But also some rare hauberks like the Plain Hauberk and Forester’s Hauberk, so it may be worth participating in the lottery or otherwise keeping an eye on the auction house if you’re still after a particular cosmetic. 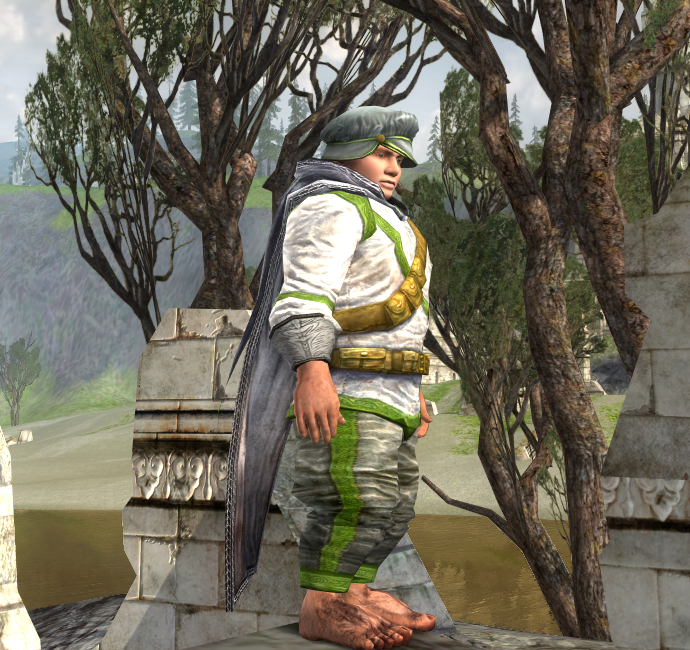