In april of 2011, now ten years ago, I began this blog about cosmetic outfits in LOTRO. I did not really give much thought to naming the blog and just dubbed it “Cosmetic LOTRO” thinking I might change it later. Well as you can see I never did and the name stayed. I never thought it would last this long. I never knew that creating outfits for my LOTRO characters would become such an important part of my game experience. A game that I still love and play every week, sometimes every day.

In 2011, and even before that, the use of cosmetics was really starting to take off. There was no wardrobe function yet as we know it today, nor multiple outfit panels, but it was possible to equip an outfit cosmetically on the one “cosmetics tab” that had been added to the character panel. There were several cosmetics available in game, mostly from festivals, some at the skirmish camp. The store had some cosmetic cloacks and dresses as well. It was also possible to equip armour cosmetically, but only if you qualified for wearing it, giving heavy armour classes an advantage for they can wear all armour types. All in all, outfitting had become a thing, it was booming all over Middle-earth, and I became obsessed with dressing up my characters in something other than the crazy looking mismatched potpourri of gear from quest rewards and instances. I loved the dresses from the festivals and realized that I was most interested in creating “semi-realistic” outfits that would be a good fit to Middle-earth culture. Though admittedly quite a few of those retro armour pieces were anything but realistic (Rift shoulders anyone?). Trying for a Ranger outfit pre-Isengard release was a real challenge. Cloth shoulder pads and a pair of boots from the Great Barrow were the best we had back then. 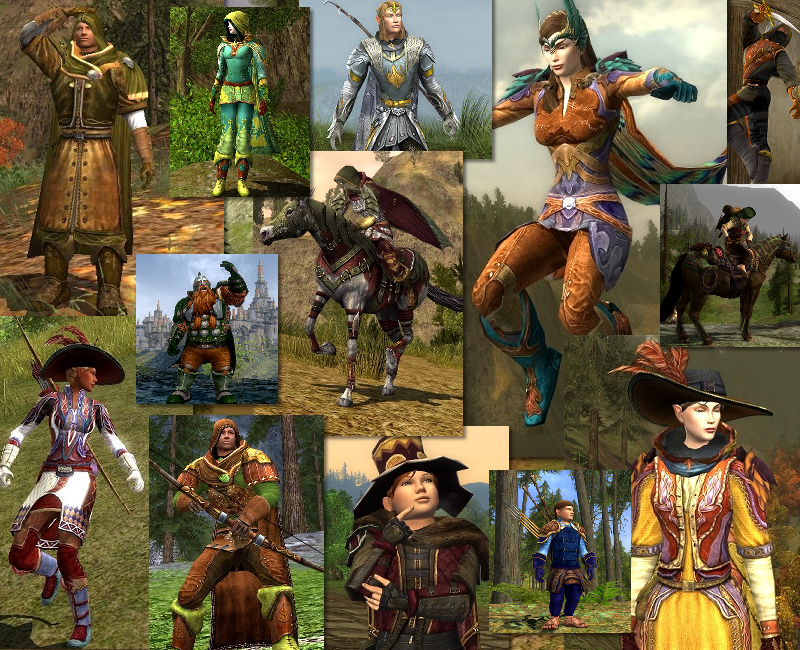 When I first searched for cosmetic outfit ideas on the internet I found Devonna’s blog “Lotro Stylist“. Her blog was the inspiration for me to start my own blogging adventure. Even though Devonna has long since stopped posting, I still visit her blog every so often for inspiration. She was a pioneer and one of the best outfitters around, making brilliant outfits with the limited selection and few outfitting options we had available at the time. Another major inspiration was Cithryth. Her blog is gone but her video’s are still up on YouTube. She inspired me to get into raiding for cosmetics, because well, raiding pants just look better. Later on Freyjuska joined in with “Lotro Fashion“. “The Starry Mantle” began posting later that year, and she very much focussed her outfits on the lore of Middle-earth, creating looks for believable characters rather than mere outfits. We started organizing Cosmetic Outfit competitions together and our blogs were often featured on the LOTRO forums. Not much later Nathrien from Material Middle-earth created a blog and started sharing outfits for characters that always seem to be dancing through Middle-earth in mesmerizing combinations. Nath has also compiled an invaluable database of cosmetic weapons on the blog. Gloredh from “Wandering Around Arda” still creates the best and most elegant Elven outfits, usually embedded in a lovely tale or a bit of Elven lore. She is the only outfit blogger who is consistently keeping us posted about the latest cosmetic items and gear whenever a new update or festival arrives. I completely rely on her to keep me informed.
Many other fantastic outfit blogs have come and gone over the years. Some of them are still here, occasionally posting just like myself. I cannot link them all to you in this post, but please have a look at all those wonderful blogs as they are mentioned in the links section at the bottom. They are worth a visit!

In my early blogging days, I didn’t have a good computer, nor a clue how to take good screenshots, but that apparently never stopped me from sharing what I most loved about LOTRO with other players. People were commenting and responding on my blog as we all shared a common passion. Somehow Turbine (now Standing Stone Games) had noticed the outfit rage and created a cosmetics store in Bree called “Lalia’s Market” and placed cosmetic mannequins around the major cities. Some of my outfits are still featured on those mannequins. In the early days of Lalia’s the store was regularly updated with new outfits. The NPC’s in Bree still talk about those wonderful days, reminding me to stop by and take a look. Unfortunately these cosmetic initiatives have long since been abandoned and Lalia’s has not had anything new to offer for years now. Even the cosmetics and classic vendors at the skirmish camps have not received any update to their inventory in years. I truly wish the devs would at least put a “ceremonial” version of those Erebor and Throne of the Dread sets on the mannequins at Lalia’s! (just sayin’).
We did get new seasonal vendors in Bree a few years ago, selling some great cosmetics. I am certain Lalia resented the competition. However they don’t rotate very often, if at all, so access to their inventory is extremely limited, on top of limitations that result from a currency cap specific to those vendors.

When I just started out I couldn’t stop creating new outfits and post them to my blog. I was fanatical. When I browse through those early outfits, some of them seem hilarious to me now, but I leave them there just for the laughs and memories. Over the years my posting frequency has fluctuated. I have taken short and long breaks, and I have even gone through a longer period of blogger burnout a few years ago. However the good news is that I am still posting 10 years later and that my screenshots have greatly improved during those years! Through it all I have always continued to play LOTRO, and always continued to dress up my characters with ever new outfits. Today, I am just taking it as it comes and only post when I feel inspired to and have the energy to. Hey, I’ve gotten 10 years older as well!
Outfitting still makes me happy. I can easily spend an entire evening just trying on things from my wardrobe and creating new combinations in the preview panel, oblivious to what is happening around me or what is being said in kin chat. Whatever else I may do in Middle-earth, outfitting will always be at the heart of it.

Thank you all for sharing these 10 beautiful years on this blog with me, thank you for looking, reading and commenting. Thank you for all your messages and questions. It is sweet to know that even after ten years, people still share this passion with me, and still find value and inspiration on this blog.

LOTRO goes RETRO outfit contest
To celebrate this 10 year blogging anniversary with all of you I am hosting an outfit contest, and Standing Stones has kindly sponsored with ten LOTRO point codes to give away to the winners!!
So open up your vaults and retrieve your best Retro items from back in the days. You can use anything except items from the Mordor or Minas Morgul expansion years (so no items that appeared in 2017 or later). But anything up to and including Helm’s Deep is fine. If you manage to create something decent with Armour Smith items and old world dye colours you get extra appreciation points!

To participate in the LOTRO goes RETRO outfit contest:

The 10 most fantastic and wonderful outfits will each receive 500 LOTRO points, courtesy of Cordovan, Standing Stone Games, and will be featured on this blog.